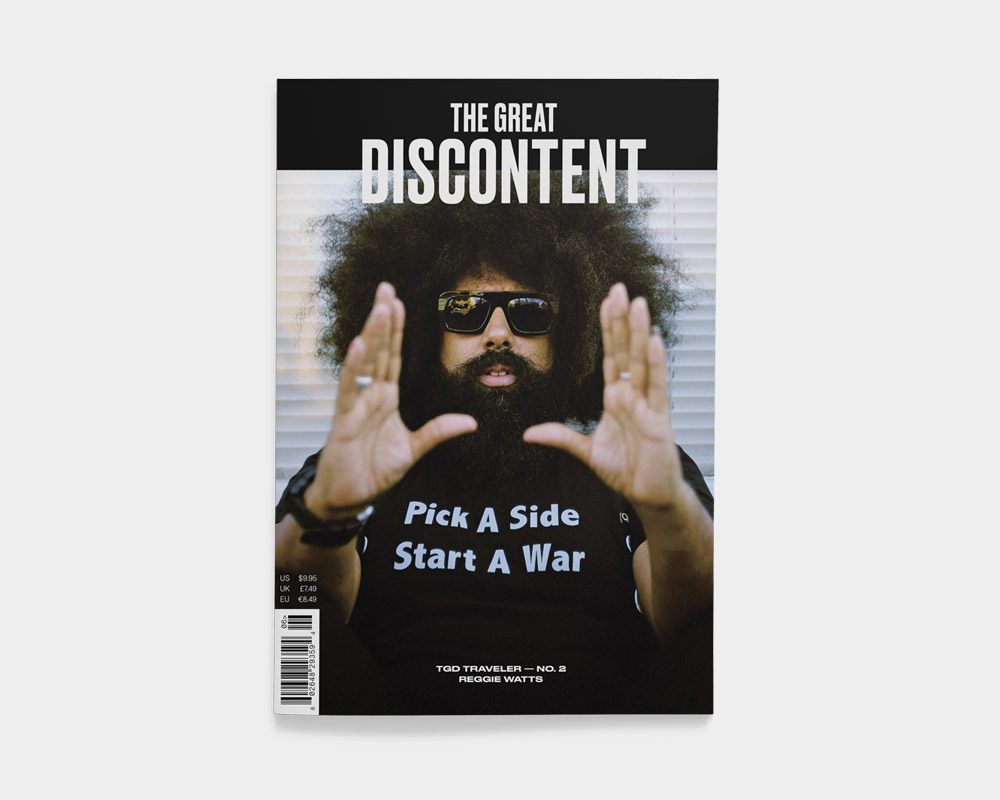 Editor’s note: This is a print-first feature, originally published in The Great Discontent, Issue Three. Pick up the print magazine in our online shop.

You’ve been a full-time artist for eight years. Prior to that, you were also a professional skier. Did your time as an athlete influence your process or technique as a painter and artist? Completely. Most athletes are fortunate enough to learn discipline and work ethic through constant training. In my case, there was also an intensity level that has very much been brought into my work. Technically-speaking, my physical presence in my work is inherent, and it is absolutely exhausting, but so is finishing a 10-mile run or a 2-hour hike up to a peak for the best ski line. That which is the hardest to achieve is worth working for; that probably sounds pretty intense and crazy to a lot of people, but I most definitely think that way from being an athlete. I don’t think twice about it. Once you reach a certain threshold for the way things move around you and how you react—staying on your toes, being mentally and physically prepared—it’s hard to turn back, or turn down for that matter. Being so in tune with my body is the biggest gift: it helps to keep me balanced, and that’s of the utmost importance in this lifestyle.

“That which is the hardest to achieve is worth working for; that probably sounds pretty intense and crazy to a lot of people, but I most definitely think that way from being an athlete.”

Although you’re known for your massive paintings, you’ve created more installations as of late. As an artist, you’re continually reinventing yourself through your work. Is that something you consciously think about? Sometimes. It’s actually really important to step away and gain this kind of perspective, because it’s so easy to get lost in the work and in the moment. I’m naturally very open to change, and I desire it most of the time, so I think reinvention is a byproduct of that. If reinventing myself is my best tool, then that’s what I’m going to use. I like being versatile, but it does force me to be very prepared to explain what the fuck is going on when I go from a to b, or c to z.

I’m serious about what I do and about the power and presence that my surroundings are capable of possessing. My interest in creating immersive installations stems from that. I want to create experiences, and not just cool pieces of art that people can hang on their wall. My path as of late incorporates both.

Speaking of reinvention, let’s talk about your avatar, Coco Bunny. How did that originate? (laughing) Coco Bunny cracks me up. Everyone wants it, and that’s good! I initially created Coco Bunny as my avatar because I needed new business cards and I was so sick of writing my name over and over. I wanted to create an intriguing image that could embody my personality. Coco Bunny has elicited questions and curiosity, and considering that I haven’t put too much effort into it, it has grown immensely in an organic way over the last year—I guess that’s when you know that things are really meant to be.

Coco Bunny itself is defined as “the existential rabbit and psychic guide to the light.” Its motto is “I like you.” You’ll see it as my calling card stuck on people, phones, places, and sidewalks wherever I go. It is its own entity. Anything beyond that is a mystery, including the future it holds.

From December 2013 to February 2014, your gallery show, 24HR PSYCHIC, which featured three painted works, was open to the public 24/7 in a custom-made space. Tell me more about the idea behind that show. 24HR PSYCHIC is a ghost gallery concept I created to offer a platform for discussion of self-identity, including topics of metaphysics, contemporary philosophy, and phenomenology. I am very passionate about studying those topics and wanted to address them directly. 24HR PSYCHIC was launched with the installation, Lift-Face, which was aimed to enlighten the existence of self as transcendent based on the nature of experience. To produce that effect, all of the pieces in this exhibit were reflective.

The two paintings on canvas had a base layer of Rorschach studies, which I used to self-analyze. I then covered them with a gradient facade of car paint, which was pivotal to the process—I wanted the pieces to be about the viewer and not the artist. Finally, I cut the canvases to create gaps in the structures and reveal the aluminum stretcher bars in an attempt to expose the skeleton and an additional layer of self. There was a ten-by-ten-foot sculptural piece made out of stainless steel and gold car paint in the middle of the room, which was integral in holding the show together. The 24HR PSYCHIC neon sign was also important as it glowed pink 24/7 and blinked when the gallery was active, or when the psychic was present.

Did you receive any interesting responses from people about 24HR PSYCHIC? I get phone calls asking for the psychic on a regular basis. I don’t treat these lightly, either. Since I’m not a trained psychologist or psychic, I refer those individuals when possible. 24HR PSYCHIC will come back in another unexpected, transient space in the near future, though. Since it is a gallery by definition, I also receive many artist submissions. This is actually great, because I don’t want the next show to be all of my work. I also received interest from Marina Abramović’s team, which was obviously a massive compliment.

Speaking of the spiritual, if you could time travel and talk to your 18-year-old self, what advice would you give to her? I’d probably tell her to learn, love, and trust herself.

And what about your future self—any hopes or dream for her, either personally or professionally? Ideally, I would like to continue to be on this very amazing path of life that I’ve been so fortunate to be on thus far, professionally and personally. I also hope that I continue to learn to slow down from the crazy speed of living that we all seem to struggle with.

I’m curious: what’s next for Lisa Solberg? I’m headed to Powder Mountain in Eden, Utah, as an artist in residence for Summit Series. I’ll be working directly on a Sno-Cat to create a site-based multi-disciplinary sculpture. For this, I’ll be using a Japanese style of truck decor called Dekotora as inspiration. After that, I’ll be preparing my performance-based installation, Mister Lee’s, an exotic dance club juxtaposed with a greenhouse—more details to come! Additionally, I’ve recently been inaugurated—although not officially—as The Standard, Downtown LA’s intrepid correspondent, writing crazy stories about my experiences, which is a job I accept with open arms. Last, but not least, I’ll be participating in a few really cool group shows that are coming up.

Enjoy this feature? Read our initial interview with Lisa Solberg, published in September 2011 ↪

“I’m naturally very open to change, and I desire it most of the time, so I think reinvention is a byproduct of that. If reinventing myself is my best tool, then that’s what I’m going to use.”