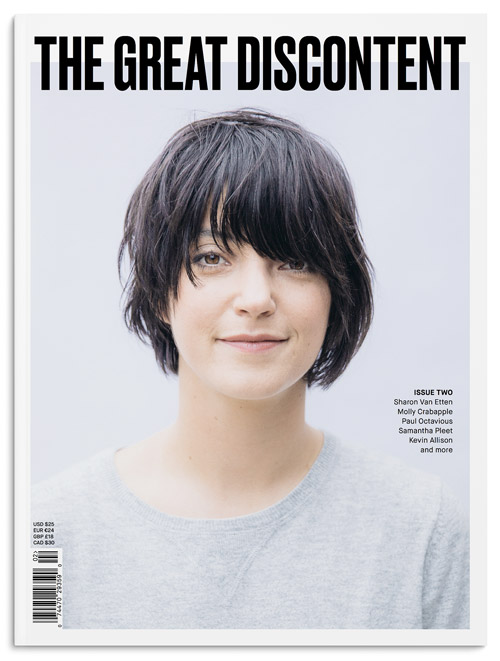 Editor’s note: This is a print-only feature, originally published in The Great Discontent, Issue Two. To read the interview in its entirety, pick up the print magazine in our online shop.

Describe your path to what you’re doing now. I grew up in a fairly creative household in Philadelphia. My mom made furniture, and my friends and I built crazy puzzles and toys in her wood shop. Outside of that, I constantly made things. I especially liked to make clothing for the strange and amazing plays that my sister and I performed for our neighbors—there was a point when my parents might have thought something was wrong with us kids because we weren’t very in touch with reality. (laughing) No, my mom thought it was good, and she knew that we were just artists. As an artist herself, she understood that.

Throughout school, I acted and participated in school plays, but when I graduated high school, I decided that acting wasn’t for me. When it came time to go to college, I enrolled in Pratt Institute to study painting. I moved to New York for college and was suddenly surrounded by so much culture, especially fashion. In Philadelphia, my sources of inspiration were vintage and charity shops, and maybe Urban Outfitters. (laughing) But New York was an extremely inspiring experience. After a year of studying fine art at Pratt, I switched my major to fashion design.

I did many internships during college, one of which was at the fashion collective, threeASFOUR. Those people are true artists: they create a world that is totally their own. Being there was such an inspiring experience! I used to arrive at the studio at 2pm, work until 2am, and then go out with them afterwards. It was a great way to be introduced to New York.

I also interned at Harper’s Bazaar as a second styling assistant. There, I saw the craziness that happens behind the scenes, like having to run between sample rooms all day and then go to a trailer all the way in New Jersey because someone forgot a dress. I experienced what a person has to go through to be in this industry, which seemed much easier before I was actually in it.

In 2007, I graduated from Pratt Institute, and I started my fashion line shortly after that. My first collection was mysterious and mystical, and I still love it. There was an amazing change happening in fashion around that time, and independent fashion was getting more recognition. My collection was really different during a time when everyone still thought Sex and the City was what totally captured New York fashion. I had this occult-like, medieval, magical, yet modern aesthetic. For my first show, I created a cobblestone runway, complete with peat moss for the models to walk down, and I had a guy holding a candelabra walk out to start—it was bizarre.

“Start small, and grow organically. If you want to create something truly unique, I guarantee it will take time to find your voice.”

My first show was really fun, and I haven’t lost that enthusiasm throughout my career. As designers, we go into another world, into the unknown, so it’s important to be experimental and think outside of the box. We’ve continued to evolve, and photography has now become a huge part of what we do. I love it because you can capture the world around you, finding and sharing magic in the everyday. That’s what we’re about.

Wow, it’s been a lot of years—it’s hard to remember everything that has happened up until this point.

You went into design in New York right after you graduated college. Was it a struggle? Oh, my god. It was so hard. I had no idea what I was doing. That transition looked like a rack of clothes sitting in my bedroom with a bunch of buyers I didn’t know coming into my apartment to look at them. The samples were made horribly because I made them myself; I was just out of school, so the lines were sewn incorrectly and the fits were weird. Luckily, I worked at a great shop on the Lower East Side called TG–170, which was the first place I sold my clothes in New York. The store is no longer there, but it was influential when it was around. It was a great place to meet people and enter the fashion world because it was the first to carry a lot of independent clothing brands.

I had an amazing friend, Sarah McCormack, who owned a vintage store called Ghost Town, and she was super excited and inspired by what I and other young Brooklyn-based designers were doing. She knew a lot of musicians, so she introduced me to them and had me start dressing them for shows. We dressed bands like Chairlift and Au Revoir Simone—musicians that were, and still are, inspiring to me. It was a great way to get my designs out there because all of the digital media we have now, like Instagram, didn’t exist yet. My work started to spread by word of mouth, and people started to hear about it.

“As designers, we go into another world, into the unknown, so it’s important to be experimental and think outside of the box.”

Did stores start carrying your line after you began working with musicians? With Sarah’s help, stores were carrying the line from the beginning, and the number of stores grew slowly from season to season. Working with musicians just seemed natural, because I saw what was happening around me in Brooklyn with independent music, and I was inspired by it; I wanted to be a part of it in some way. And if it helped get my designs out there so more people would find out about them, then that was great!

Around the time I began styling musicians, I also started working with showrooms to represent the line. There was a time when I thought that in order to get yourself out there, you had to somehow get your clothes in front of department store buyers. I started out working directly with boutiques I believed in, like TenOverSix, American Two Shot, and Bona Drag. I was really happy working with boutiques, but I didn’t know if that would be enough to sustain the business. I’ve never been picked up by bigger stores, other than one-off capsule collections I’ve done with Anthropologie and Urban Outfitters. That’s been a big accomplishment; we’ve grown out boutique business to a place where it can sustain the company. If an opportunity with a bigger retailer comes along, we can make sure it is the right thing for us to do.

After seven years, I feel like my clothes are just now starting to find their place in the world. Even if you go to school and work a lot of internships, you can only really make your way through experience and the process of trial and error. You have to come up with your own method of doing things if you want to do something truly unique.

What advice would you give to a young person starting out in the fashion industry? Don’t do it for anyone else but yourself, and don’t make decisions based on what you think other people want or expect from you. It sounds simple, but it is very difficult to tune out all of the external voices and ask, “What am I passionate about? What do I like and admire in design? What am I trying to say with my work?” Everyone will answer these questions differently, so that will naturally set you on your own path. If you are true to your own voice, which nobody else has, then that is the value you bring to the world. If you are fulfilling someone else’s desires, you can be easily replaced. Start small, and grow organically. If you want to create something truly unique, I guarantee it will take time to find your voice.

Enjoy this excerpt? Read the entire interview in The Great Discontent, Issue Two, available in our online shop.

“After seven years, I feel like my clothes are just now starting to find their place in the world. Even if you go to school and work a lot of internships, you can only really make your way through experience and the process of trial and error.”