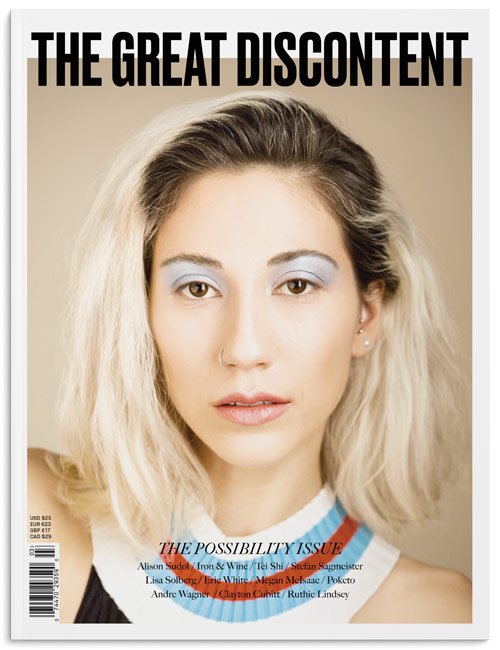 Editor’s note: This is a print-only feature, originally published in The Great Discontent, Issue Three. To read the interview in its entirety, pick up the print magazine in our online shop.

Describe your path to what you’re doing now. I grew up in a big family and moved around a lot. I was born in Argentina and my family moved to Colombia when I was two. When I was eight, my family moved to Vancouver, BC; we briefly returned to Colombia when I was fifteen before moving back to Vancouver where I finished high school. After that, I lived in Montreal and Boston during college before I ended up in New York. That’s my geographical path: I changed environments often and grew up in a pretty eclectic mix of cultures, which I think translates to my personality and overall approach to things.

I’ve always been musical, and I was very interested in music throughout my childhood. It was the one thing that was constant for me. I sang and wrote from a young age, although I was private about it. I had wanted to pursue a career in music or do something creative, but I didn’t see a realistic path to do that. All of my sisters sing, and my family loves music; I grew up being influenced by the music my parents played in our home and my sisters and I put on shows together, but nobody was a professional musician. There is definitely creativity in my family, but I had no point of reference for how to create a career out of it.

“Once I started sharing my music and had something I was proud to put out, I narrowed my focus and said, ‘Alright, I’m doing this.’”

After high school, I studied psychology at McGill University in Montreal. While I was there, I ended up receiving a scholarship to study music full-time in Boston. That was the point when something switched in me and I decided to actively pursue a career in music.

While at school in Boston, I spent the entire time working on my music and writing, but I still wasn’t sharing it with many people. During my last semester, I met Luca. He was one of the first people I really bonded with there, and I shared my music with him. When I showed him the songs I had, he was really encouraging and proposed that we work on them together to make a finished product. We had both planned to move to New York after school, so after we did that, we put aside a three-week period of time to work on my music. That resulted in my first EP, Saudade, which I released in 2013.

Once I started sharing my music and had something I was proud to put out, I narrowed my focus and said, “Alright, I’m doing this.” People I didn’t know responded positively to it, which started to energize me. Since then, I’ve been working hard on the music and creating my own path.

What’s the biggest risk you’ve taken? The biggest risk was initially sharing the music when I put my first song out. When you put out something that’s such a big part of you, it’s emotionally exposing. It was a huge personal and emotional risk. It could have gone so many different ways, but, thankfully, it went the best way it could have. I received a lot of positive feedback and support. Making yourself vulnerable and subjecting yourself to the judgement of others is a risk that you continue to take when you’re creative. I continue to do it daily, but that initial plunge was the biggest risk.

What advice would you give to someone starting out? Know what you want. You’ll learn what you do and don’t want along the way, but I feel like I see a lot of people who want the things that come along with being a musician or artist, but don’t know what they actually want to represent. When you don’t have a vision for what you want to put out there, it can lead to being influenced by those around you. Everyone is going to have an opinion and give you advice and tell you how to do things. But if you really want to do your thing and be successful doing something that’s unique to you, then you need to have a clear idea of what you want. You will be influenced by others, but you should have the strongest sense of what you’re putting out there.

How do you think you’ve developed such a strong sense of self as an artist? I’ve always had strong opinions and wanted to do my own thing. I think that my strong sense of self partly comes from moving around and changing environments so much when I was growing up. I had to be in touch with myself and develop confidence, even though I’m not confident in a lot of ways. My family also instilled confidence in me, and I’m grateful for their influence. For the most part, I do what feels natural to me, and I don’t apologize for it. Or at least I try not to.

Enjoy this excerpt? Read the entire interview in The Great Discontent, Issue Three, available in our online shop.

“Everyone is going to have an opinion and give you advice and tell you how to do things. But if you really want to do your thing and be successful doing something that’s unique to you, then you need to have a clear idea of what you want.”