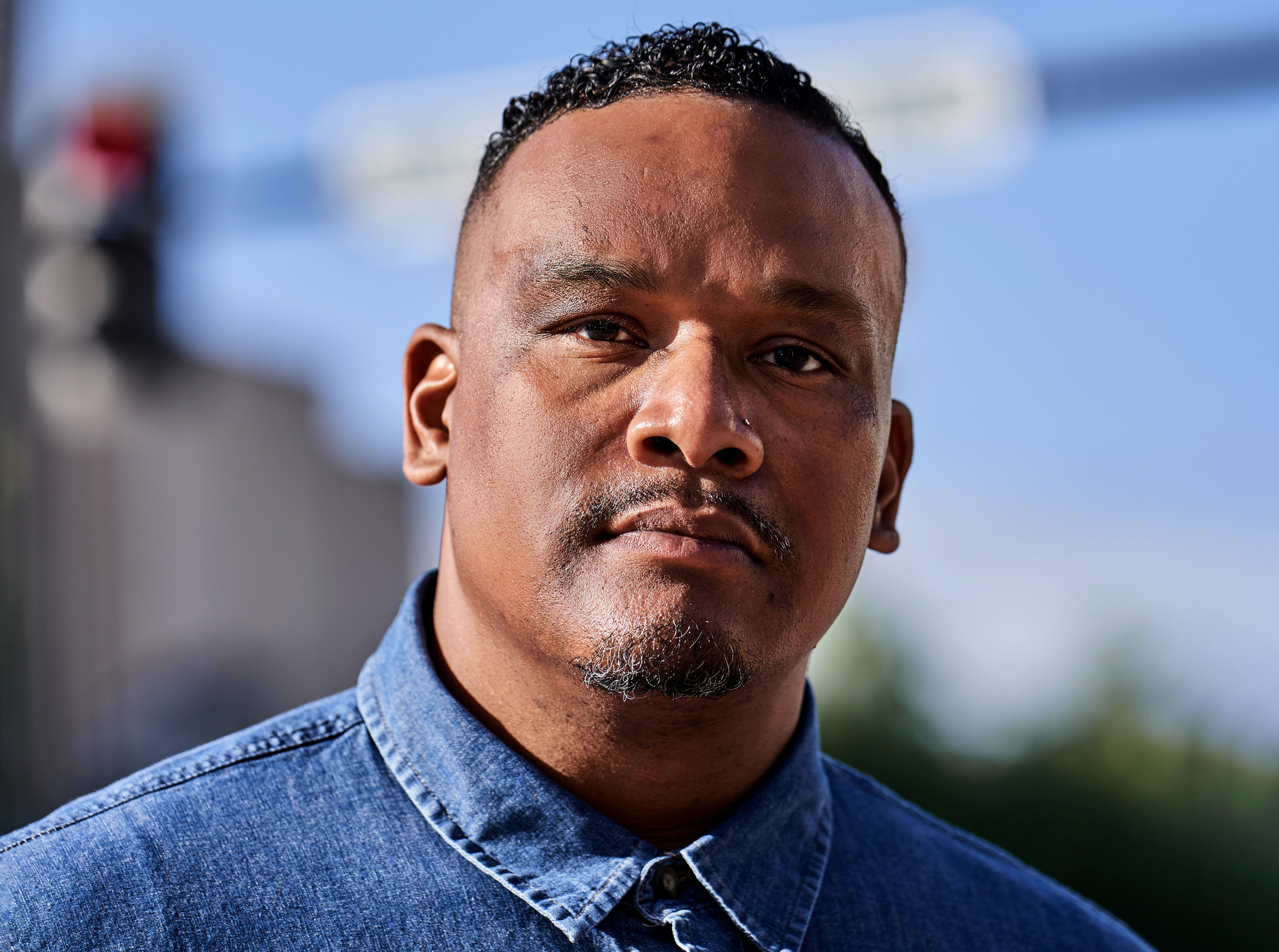 Let’s start by talking a little bit about your origins. Where did you grow up?

I grew up here in Inglewood [in southwestern Los Angeles County]. I moved here when I was seven. I went to Inglewood Christian, which is right off Market Street in our downtown area. Inglewood probably shaped me to be a little street smart. I went to a private high school, lived in a gated community, but it’s like going from one safe place, through the forest, to your home base. I was making sure I was always aware of my surroundings. The architecture here is beautiful. It’s very art deco. It’s just never lost that aesthetic.

Talk about the earlier part of your career. You started in marketing and advertising?

I started working in advertising as an assistant media planner at one of those agencies that just never changed from the ’90s. It was super bro-ey. I got in because I was working at Best Buy helping a customer out, and she said she worked at an ad agency. She introduced me to someone else, and that’s how I got the job. It was basically just good customer service—that’s how I started my career in advertising. I got laid off right before the recession financial apocalypse. Eventually, I got a job at another agency, which I loved, and then from there, I was able to transfer to New York. I worked there for four to five years and then came home in 2015 and opened my own space.

And was it during that time in New York that you started collecting art?

Yeah. I went to openings, I went to museum shows, I visited a couple of artist studios.
I wanted to see what these artists had to offer. I resonated with a lot of the stories that they were telling and felt comfortable enough to start to collect. It was the typical gatekeepers telling me I can’t. I couldn’t buy a piece because nobody was willing to sell to me even though I was willing to probably pay more. I’m just one of those people who, if you tell me I can’t do something, I’m going to find a way to do it. I was starting to talk to a few artists, and they told me that they just wish they had more control over where their work goes.

So, you came back to LA in 2015, and was Residency Art Gallery birthed in that moment?

Well, I kind of planted the seed before I left New York. Working in advertising made me realize I didn’t want to work for anyone else. You’re stressing over this job that really doesn’t care for you, that can just replace you at any time. You’re not really building anything for yourself or for the future. I got booted out of my apartment by somebody who bought the building and raised the rent. So I was like, let me just go back to LA, kind of reset a little bit, figure out my lifestyle, figure out my next step.

What happened when you returned to Inglewood?

I was trying to find that art scene out here that I found in New York. And I just didn’t. We had a commercial Black-owned gallery, named Papillion, and as soon as I came back, it closed. The catalyst for me to jump into opening Residency was going into a space and seeing a show by an artist called Aaron Fowler. The subject matter was about St. Louis and about Michael Brown. It was deep and I just resonated with it. Then it’s kind of disheartening when collectors are looking at the work, not in a sense of empathy, but money signs. And the only people of color in there were the artists’ family and maybe one or two collectors that I already knew. That was it. I was like, you know, I feel like the community needs to see this work. It has this visceral subject matter that we need to see as Black and Brown people. But why isn’t this gallery marketing toward these people? That’s a transformative insight. In We Are Here, the Jasmin Hernandez book, you said that the shows feel like a communal family gathering. It’s a vibe that just doesn’t happen at other galleries. Is that the goal?

I would probably say that Residency’s goal is to try to show professional work from artists that directly reflects the community. It’s just weird having to go to Beverly Hills or West Hollywood to see all this Black and Brown work. It’s like: “You transferred this out of somebody’s studio in Boyle Heights or Compton or Watts or something. You take art out of these neighborhoods to bring it to your neighborhood to sell it, and we never see it again.” It’s almost like theft, you know.
At best it’s theft and appropriation, and at worst it’s taking a natural resource out of a neighborhood—a genuine, valuable natural resource, not only in terms of dollars but in terms of story and in terms of culture and in terms of character, and it’s hiding it. You said earlier that artists want more control over where their work goes. Will you talk about how you approach that differently?

What do you want someone who comes from the community—regardless of where they are on the spectrum of understanding or appreciating art—to feel when they come to one of your shows?

It’s mainly just feeling comfortable when you go into a spot. We want them to feel like they’re going to any other business in their community. Before the pandemic, you would just come to the gallery, and if you want to talk about the work with me, fine. If you didn’t, if you just want to look at it, fine, too. If you just want to pull some chairs out to just hang out, that’s cool. I have had people lose hours sitting down talking about art, the industry. I think that’s what lacks in other spaces where someone sits behind a desk on a computer and points you to a piece of paper. Having just finished a big exhibition, when do you start thinking about that next show? Where do those ideas come from as you start to build themes?

The whole idea behind Residency is that I wanted the artist to kind of treat it like a residency program. I want you to come in, completely transform this place—fuck it up, do whatever you want to do. I want you to get whatever’s in your head out. And then hopefully both of us can learn more about the process and learn more about the work and form something from there. I’m kind of art directing them just a little bit, but mainly it’s all up to them. Meaning, I’ll suggest: “Hey, maybe we should have some work priced at this level for these collectors. And then you can do the big pieces, you can do small pieces—whatever you want to do.”

It feels like you take it a step deeper than a traditional gallery curator. You’re connecting dots between the pieces of work and community themes in a way that’s going to be genuine to the people coming in the door and empowering to the artists. Do you see this work as a creative exercise?

I can do a show that’s overthought and super textbook and academic, but I feel those shows don’t resonate with the community. 1992: An Examination of the Iconography from the ’92 LA Rebellion, which we did in 2017 as a 25th anniversary retrospective—that’s still a favorite. The fact that we had the support from artists who were creating work during the riots and then we also had these newer, younger artists was one of my favorite shows to put together. The cherry on top was having the photos by Kirk McCoy, who was the sole Black LA Times photographer at the time, and developing a relationship with him. To revisit a story after 25 years about a community for a community is kind of a perfect circle for the art.

Totally. Our New Contemporaries group shows are also some of my favorites to put together because I do way more looking and digging for artists. I try to pair a couple of big names, high-level or midlevel career artists with a bunch of artists who are just coming out of school.

So, are you always collecting? I don’t just mean that in terms of buying art. Are you always looking for new artists and new voices?

Just day in, day out. Yeah. That’s all I do. It’s my job to look at art all day. I really want to talk to the artists, too.

Instagram is a huge tool for artists. I tell artists all the time, like: “Have two Instagrams. Have a personal one and have one that shows your work. If I go on your Instagram, and I see nothing but selfies of you at the beach, I’m not going to care about your work.” Every trip that I’m on is a work trip because I always try to check out artists wherever I go.

What’s next in this work for you? What are you looking forward to?

I’m opening up the second space that’s going to be in the new stadium retail development in Inglewood. We’re homegrown, and it doesn’t make sense for a bigger gallery, a white-owned gallery to come down here. I don’t want them to fucking Columbus this neighborhood, like, “Oh, there’s a new area we discovered.” And then I’m going to the South, where I want to check out a new space to open up. Who and what are you excited about right now?

Honestly, Black portraiture is almost an oversaturated game right now. What’s more inspiring to me is more abstract work, photography, multimedia. You can have your portrait work, but can it be overlaid with something? Can it be collage work?
Some of the artists right now that I’m really feeling would be Larry Li, Texas Isaiah, of course, Carmen Neely. Another person I wanted to mention is Natalie Ball. She’s an Indigenous artist doing transformative work right now.
A lot of artists are pushing the envelope when it comes to, I want to call it like “hood aesthetics,” showing their influences from their neighborhood: Patrick Martinez, Alfonzo Gonzalez Jr. Then Lauren Halsey —I think she’s the most inspiring. Out of everybody who says they’re coming back to our neighborhood to do stuff directly with the neighborhood, who does it? Lauren Halsey is boots on the fucking ground. She is out here handing food out to the neighborhood. It’s so inspiring.

The work you do to elevate and bring those incredible talents into sight is really extraordinary.

Thank you. This goes back to the differences between cultures. I feel like more Black, Brown, Asian communities are more family focused and are more community based. You have some other elitist communities that just kind of hoard things for themselves. You can definitely see it in the art world. Are you going to share, or are you going to hoard? Just because you may not be from the same community as an artist, it doesn’t mean you can’t be the audience. If you resonate with it, then, you know, rock with it.

When all is said and done, decades down the road, how would you like to have this work remembered?

It’s an old Hot Boys quote, “Get it how you live.” And I think I got it how I lived. This is me—this is what I do. I just want to continuously show love, just make sure everybody’s cared for and looked after. I can’t explain it any other way, man.