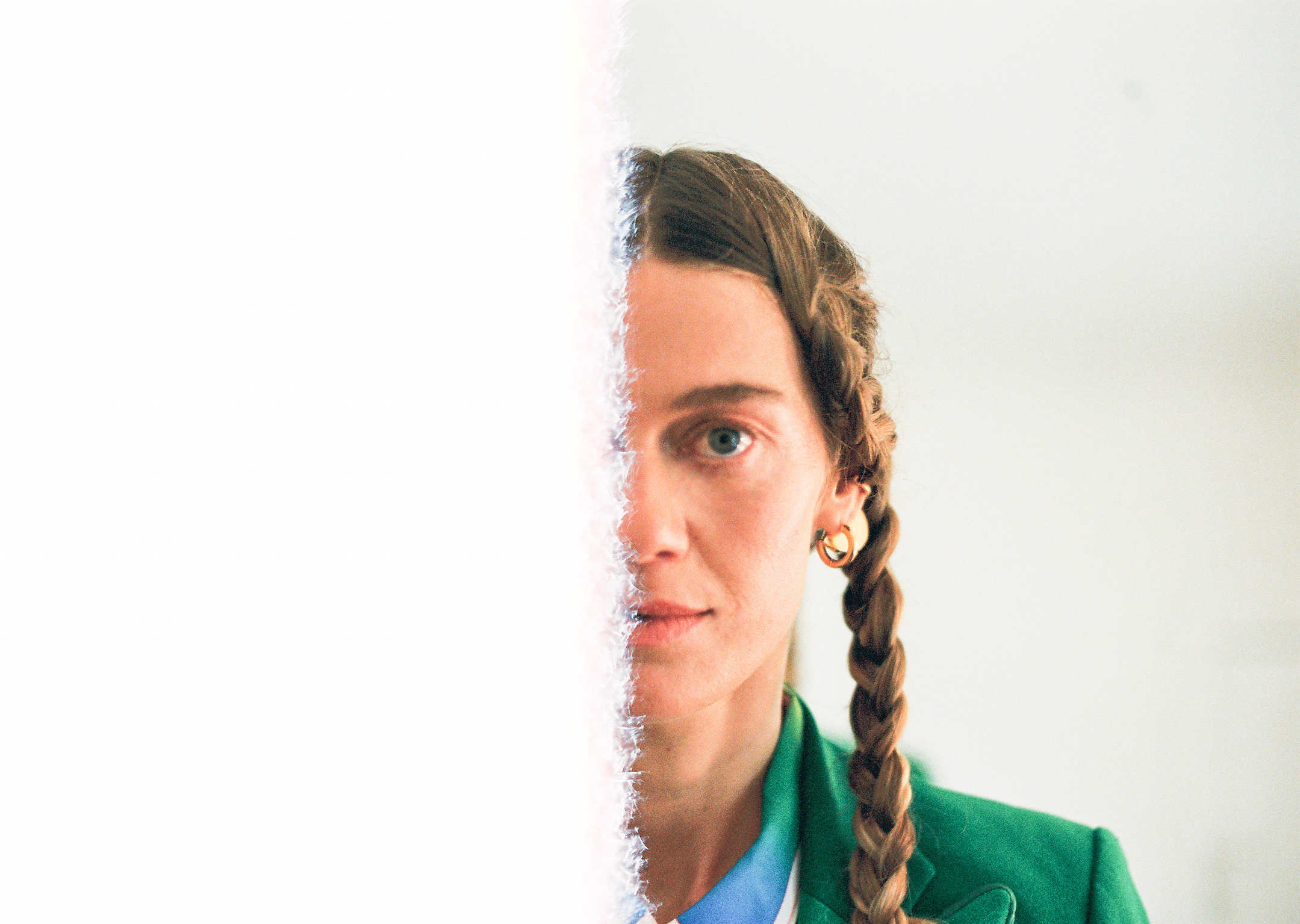 Can you talk a little bit about where you grew up and how that place influenced your understanding of who you are?

I was born in London, and when I was three, my family migrated outside Melbourne, Australia. My childhood was to-ing and fro-ing between ballet and 100-meter hurdles. My social infrastructure was pushing the body to the limits in terms of athletics.
I definitely felt an unusual sense of alienation at school, but when I was using my body, be it through choreography or through speed on the track, there was a sense of belonging. That sense of alienation and creating worlds where I felt like I belonged continues to drive my work now.
Exploring the biological limits of the body as I did when I was a kid doing ballet and hurdles fascinates me. I’ve come to learn that when alienation is present, I make my best work.

That outsider mentality is understandable, but alongside that, what seems to emerge is a defining heartbeat in the way that your work explores itself and you explore the body.

I would totally agree. I always wanted to fit in. I tried so hard to be like everybody else, but it just didn’t work. [Laughs] I was different. I found my outlet, and I think not fitting in was a blessing because it’s pushed me to create my own genre. Swimming upstream is where we all should be.

Do you feel like the arc of the last two years has shifted your perception of your work or your relationship to it?

My work occupies various ways of making. I’ve come to learn that I’m an interpreter—picking up weak signals at the fringes of culture and turning those into art— alongside this, a self investigation, of what I’m lifting up inside of me. There is an inner push and an external translation that gel together. We are forever expanding. I’m not complacent. As a curious being, I’m constantly pushing my understanding of myself and the world.
That change is also related to understanding the commerce of art. [Laughs] How do you expand as an independent single woman business owner? There is an element of responding to what people think about my work. There can be an urgency around commerce and expansion, and I don’t think that is helpful or holding for what I do. I have to move at my own speed. I take it onboard or I disagree with it. How did you transition that physicality from ballet and track and field into an expression of art?

The transition was defined by a curiosity to go back to London. I stopped dancing when I was 17 because I realized that I didn’t have the flexibility, the silhouette—I didn’t fit the shape of what was required. And so, I leaped and followed a passion. I was moving my room around every week, so I studied interior design. Throughout that course, it was obvious that I had a passion for architecture. When I finally moved to London, I worked in architecture and was going to study at Southern California Institute of Architecture (SCI-Arc), which is where I’m now a visiting professor.
Really, the path that I have trodden was not by design. It was a propensity to do things that I had no experience in and applying for jobs where I was not so qualified. It was like, “Let’s roll the dice and see what happens.” It also had to do with the people who I met and the conversations I was having. Those streams were defining my path to a certain extent—not to leave out intuition. From Future Survival Kit by Lucy McRae. (Photo/Ariel Fisher)
“I’m learning that my body is a vessel for delivering and facilitating and translating thoughts, concepts, and complexities into physical form. I’m putting a huge emphasis on how I can optimize my body and mind to provide the best platform for the art.” The concept of the body as a tuning instrument and intuition is so present in your work.

I’m a longtime fan of Swedish artist Hilma af Klint. The way that she talked about her work is that she was a medium channeling these conversations that were being sent from some kind of master or higher order. I’m learning that my body is a vessel for delivering and facilitating and translating thoughts, concepts, and complexities into physical form.
I’m putting a huge emphasis on how I can optimize my body and mind to provide the best platform for the art. They’re working in symbiosis, as opposed to beating each other up, which has definitely happened in the past. I’ve ended up on hospital tables and have been very unwell because of the art, the compromise that you go through. I have likened the artistic practice and the creative process to that of an elite athlete because I do feel that there is a similar kind of drive, motivation, compromise, and training that it requires to perform.

In terms of your practice and work, what are you most excited to explore?

Whether human consciousness can be a form of planetary survival. I’m a visiting Professor at SCI-Arc leading a seminar called “Tech’s Delicate Spell.” The goal and question is: “Can an integrated, healthy planet be ascertained from the point of view of raising collective consciousness? How can we use art, design, technology, science as a vessel to deposit awareness, perhaps in way that hasn’t been distributed before?” The fact that we can talk about human consciousness in an architecture school is exciting.
I’ve started a writing course with New York author Daniel Pinchbeck. I was joining the course to write a film, and it seems like what I’m writing is a book. Perhaps an autobiography hybrid, questioning human consciousness and the role that art can play in moving forward.
I like to think that I bring science to the street level—I’ve developed a limited edition set of “uniforms”: wearers become a committee who are actively sensitive about the future. The first collection takes on genetic engineering and how science and technology are changing the body.

Lucy McRae’s work, Swallowable Parfum, about a cosmetic pill that works from the inside.

It’s expansive, but also deeply connected, which is remarkable. You’re threading a needle that seems impossible to thread.

Thanks for saying that. There’s so much of an underbelly to the work that it’s not easy to describe. Even a body architect requires the next question, “So what do you do?”
I have two solo shows happening this year in LA. One of them will feature the overarching theme of CRISPR technology, which has been an area of research that I’ve been committed to for the last seven or eight years. LA gallerist Honor Fraser contacted me, saying, “There’s urgency for the work you’ve made on genetic engineering— you need to have a show!” September 2022, it is.
SCI-Arc is exhibiting three existing works, all machines that hug the body: Heavy Duty Love, which is returning from the Venice Biennale, alongside the Compression Cradle and Compression Carpet, all works made pre-pandemic, now called by some prophetic—as they were made for a touch-crisis world.

You mentioned this aspect of your physical health and mental health being important to the work because it serves as that platform for the art. How do you live with that truth and how do you try to preserve your own wellness in that context? It seems like it could be a constant battle.

As an artist, the role is also to self-investigate. Recently, I felt like that has been quite intense, whether it’s the pandemic or whether it’s my age. I don’t like planning, but I like routine. That may sound quite conflicting, but there was a comedian who talked about how when they woke up that there was a certain haziness to their antenna. They hadn’t plugged into the rest of the world and it was in this moment where they wrote their best work.
I feel like mornings are sacred, and so I have quite a disciplined morning. That routine, ritual, ceremony, repetition is the baseline that allows me to be vulnerable and take risks and put myself out there.
Except for, this morning, I felt rebellious, and I didn’t do it. It’s almost like there are two of me, and one is like, “You know that this is how you do your best work.” And the other one is like: “You’re so fucking strict. Give me a break, I’ve been doing this for months.”
When I ask these questions around human consciousness being a scalable technology, in a way, I’m using myself as a guinea pig or test bed. It can be at the end of projects where I can’t lift my leg because I’m in so much physical pain because I’ve just pushed myself too far and too much. That has been a pattern, which I’m learning to listen to. Part of the pipeline in projects now at the end has to include, like, a reboot. Otherwise, it’s just not sustainable—the robustness of making art in that way. Sometimes I have to work at what’s me and what’s the work. That has been an inquiry that’s been going on for over a decade. Is there any particular aspiration that you have for how your work is shared and received moving forward, Lucy?

I have a question around scale. I think about large television studios that have massive budgets, multiple departments, huge platforms to create work on a scale that would be incomprehensible for a single artist. I’m curious what would happen if I was invited into that world. This is a question that is also embedded in my creative process because when I’m on-set, the way that I work is I’m communing with a spirit or an instinct. And when that arrives, it’s an energy and a feeling and a course that is unusual. I’ve thought about being on-set at a scale of television or feature film and wondered, “Is that spirit going to show up for me when I’m around more than just my core crew?” Can one operate at that level, relying on something intangible, or would it require a different creative process? I’m open to both.

Getting back to that point of fitting in. If fitting in is the objective, then true belonging can’t emerge.

Yeah. I use my art as a way of fitting in and belonging within the world. Why would you want to fit in? I know that deep down we all want to belong, but into whose concept or what shape are we trying to fit?
I really value upstream swimming. I really value disruption. I’m an explorer at the edges of culture and continue to do what I do from a gut instinct, intuition, alchemical point of view—not a blueprint or something that ever existed before. And that’s fucking exhausting sometimes. [Laughs] But there’s no other way for me.